How Cannabis Successfully Combats PTSD. One of the top reasons why many turn to cannabis is stress management. However, for those with post-traumatic stress disorder (PTSD), access to this simple green herb can make the difference between drowning in hypervigilance and full engagement with the present. One doctor has seen the transformative powers of cannabis firsthand. Dr. Mike Hart has been successfully treating PTSD with medical cannabis and lifestyle interventions for the past three years. Here’s how.

Patients with post-traumatic stress disorder can experience an array of debilitating symptoms. From night terrors to hypervigilance, living on the cusp of a chronic fight-or-flight state can make even simple tasks like walking through a crowd overwhelming.

According to the U.S. National Center for PTSD, seven to eight out of every 100 people develop symptoms of post-traumatic stress. Canada has some of the highest rates of PTSD, with an estimated 9.4 percent of the population experiencing some form of the condition.

With numbers like these, finding safe and effective treatments and therapies for the disorder is a must.

A progressive voice in Ontario’s medical community, Dr. Mike Hart has earned a reputation for successfully treating post-traumatic stress, chronic pain, and neurological conditions with both medical cannabis and rigorous lifestyle interventions. He first started using the herb in the clinic three years ago.

The primary reason why I initially got into it was to combat the opioid epidemic. I saw a lot of patients using opioids and they were just not getting adequate relief.

They also had a variety of different side effects, a lot of fatigue, a lot of constipation, low sex drive, a million different things going on. I found that cannabis was a much better, safer alternative.

After continued training and research into the plant, he stumbled upon a wealth of research suggesting that cannabis is effective in treating post-traumatic stress disorder.

Then, two years into his practice, he was approached by the Canadian cannabis advocacy group, Marijuana for Trauma. He soon began assessing and healing veterans with medical cannabis treatments and lifestyle interventions.

How do CBD and THC treat PTSD?

It’s well-known that cannabis is a powerful painkiller. However, that’s not the only thing the herb can do. Unlike many of the conventional PTSD treatments, which include powerful sedatives, antidepressants, and anti-anxiety medications, at least two different cannabis compounds have been shown to treat PTSD in several unique ways. 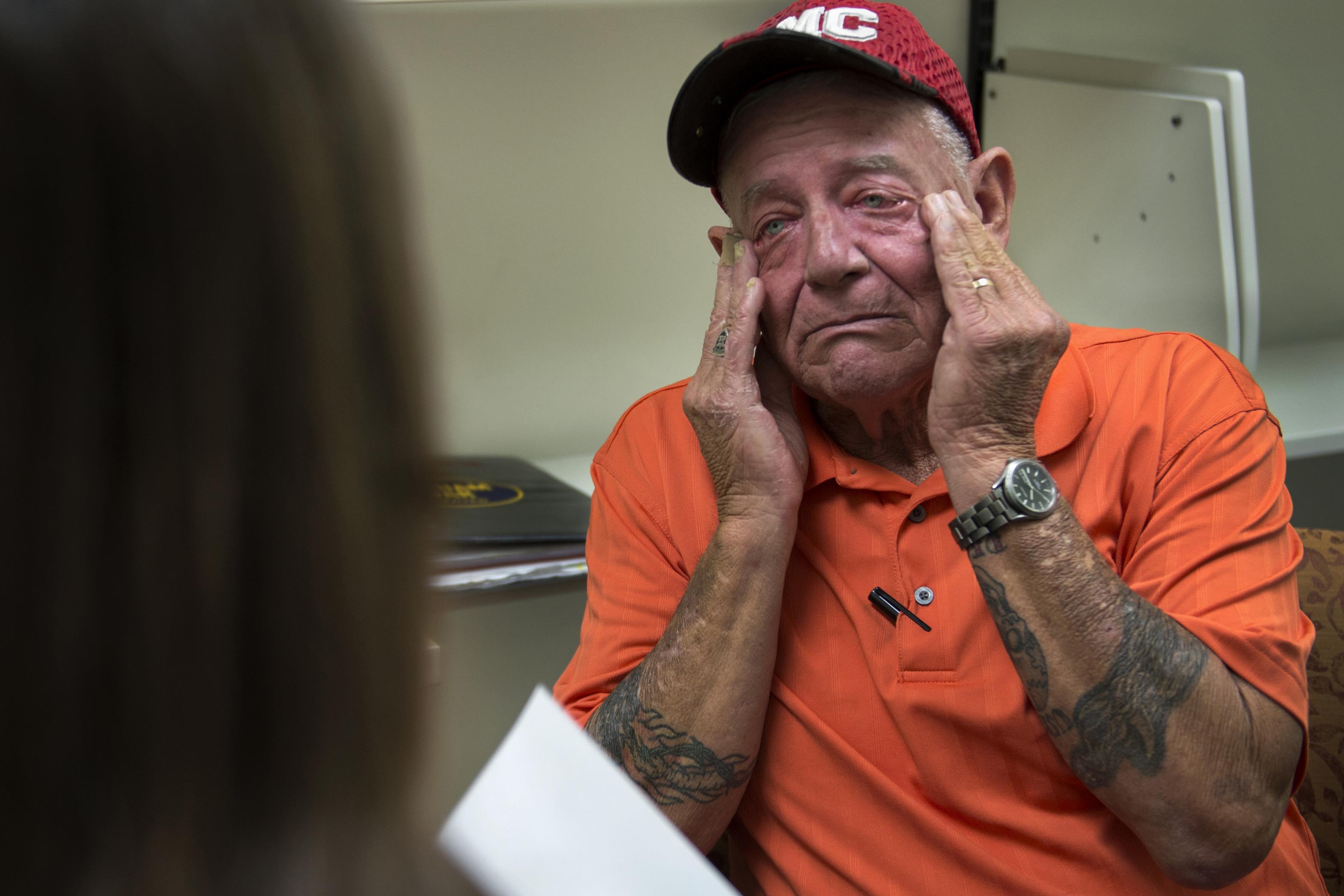 The two compounds in question are cannabidiol (CBD), which is a cannabinoid that does not cause the psychoactive “high” that is usually associated with the herb, and tetrahydrocannabinol (THC). THC is the primary psychoactive in cannabis.

Post-traumatic stress is primarily about learned fear. When you have more learned fear, that’s going to induce a state of hypervigillance and that can also cause nightmares and terrors at night.

Cannabis not only helps reduce the runaway fear response in those with PTSD but has many other tangible benefits as well. Similar to other psychiatric medications, taking calming CBD prior to therapy sessions can help put patients at ease and enable them to better respond to treatment.

While there are several reasons why CBD is effective in treating PTSD, evidence shows that psychoactive THC has some unique benefits as well.

In patients who have post-traumatic stress disorder, what we find in studies is that a lot of these patients are defficient in something called anadamide. Anandamide has been termed “the bliss molecule”, and it’s one of the endocannabinoids that is released when we exercise.

So, the “runner’s high” comes from a burst of anandamide. So, patients who have PTSD are found to have 50 percent lower rates of anandamide.

Endocannabinoids are like the body’s own cannabis. Interestingly, both THC and anandamide are similar in structure and engage the same cell receptors in the human body.

We’re correcting a defficinecy. Often times when you correct a defficiency, whether it’s a hormone or a vitamin, doesn’t matter what it is, you’re going to get results.

An herbal approach for PTSD

Every patient has unique, individual needs. Yet, for patients with PTSD, Dr. Hart often recommends a regimen of CBD during the day and THC at night.

The reason why I recommend CBD during the day and THC at night is because, for one, CBD has been shown to be effective in the literature for PTSD. Because of that, I know that patients can benefit from it in the daytime without having to use THC.

So, it’s great if someone has severe hypervigilance and they’re able to live their day without experiencing that symptom. But it’s more gratifying to myself if that patient is able to go out and perform and function and do something, and commit to a higher level.

Dr. Hart also acknowledges that while CBD can be beneficial for sleep, THC is considered a more powerful sedative. After THC treatment, many find that they are less likely to experience nightmares and night terrors, which can significantly disrupt sleep patterns. Poor sleep means potentially worsened symptoms the next day.

Cannabis is just one piece of the puzzle

Though cannabis has vast medical potential, it is just one piece of the puzzle. While different cannabinoids can help reduce learned fear and temporarily correct an imbalance in the endocannabinoid system, Hart has found that the plant is most beneficial when integrated with significant lifestyle changes. The crux of these lifestyle changes is diet and exercise.

As mentioned above, anandamide is released during exercise. This means that it’s a good idea for patients with PTSD to get out and move. In order for the body to make anandamide, a diet rich in healthy fats is necessary.

“Everyone should be following a healthy diet, anyway,” says Dr. Hart. “That’s the cornerstone of overall health and wellbeing.” While cannabis has been successful for Dr. Hart and his patients, Hart makes sure that lifestyle changes are the cornerstone of his treatment plans.

When experimenting with cannabis for PTSD, Dr. Hart strongly encourages working closely with a savvy physician.